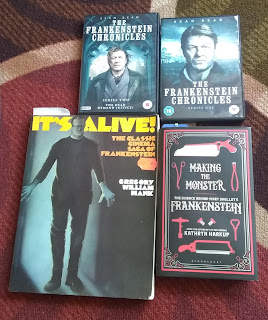 Some time ago, I won a scholarship, and a short time after, I posted about my first scholarship haul. Recently, I made my second scholarship haul (pictured above), which I would like to discuss today.

Starting with the lower left is a book titled It's Alive: The Classic Cinema Saga of Frankenstein by Gregory William Mank. I was very excited to get this book because I still remember pouring over it as a ten-year-old kid after borrowing it from my local library. Published in 1981,this was the very first book on Frankenstein films, and although it is chock-full of interesting stories about the development and creation of the classic Universal Frankenstein films, it is also filled with out-dated information. For instance, it talks about deleted scenes, such as the Monster tossing the little girl, Maria, into the water as though it is a deleted scene in the original 1931 film. This scene has been restored since the 1990s. It also mentions that Mary Shelley visited the actual Castle Frankenstein in Gernsheim, Germany. However, it is very unlikely Mary and her husband, Percy, ever visited actually visited the castle after all, even though they were within ten miles of the castle.

And this evidence is presented in the book to its right, Making the Monster: The Science Behind Mary Shelley's Frankenstein. Published just last year, Making the Monster by Kathryn Harkup is proving to be a fascinating read. It examines all of the science mentioned in Mary Shelley's novel and explains exactly what she was referring to in the book. Yet, it is more than just an annotated version of the Frankenstein novel, because Harkup proves to be a great story-teller, making this an extraordinarily fun read. While It's Alive is currently out of print (I had to hunt down a used copy), Making the Monster is available from Amazon and other book sellers. I highly recommend it.

The two DVDs at the top of the photo are seasons one and two of a television show titled The Frankenstein Chronicles. While I haven't had a chance to view it yet, it has been receiving rave reviews from all over the globe. I think it was originally produced by the BBC, and one should be advised that the DVDs will not play on most DVD players in the United States, unless you have a region-free DVD player, like I do. 😁 It is available on NetFlix. (I didn't provide a link because I don't have NetFlix.) The story follows a private investigator looking into mysterious murders that may or may not involve a certain mad doctor and his creation. I'm very much looking forward to it.

I will likely have two or three more hauls from the scholarship money as I still have not used up even half of it yet. I've outlined two more chapters for an academic conference I'm attending (stay tuned to this blog to find out how that went), and I plan on using much of my summer writing and researching as much of this project as I can. Wish me luck.
Posted by Bill "Classic" Camp at 9:35 PM