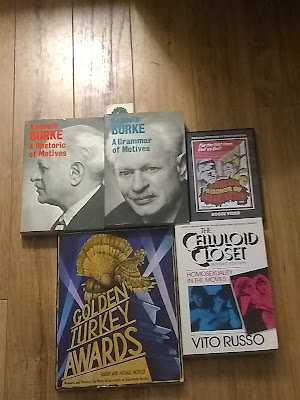 I received my first haul from the Horror Writers Association Rocky Wood Memorial scholarship for Non Fiction Writing recently (pictured above). I'm pretty sure the contents at this stage will make sense only to me, but I will attempt to explain them anyway.

The books with the face cover are my methodology, Kenneth Burke's dramatistic pentad (or pentad on dramatism). It is considered a pragmatic approach to analyzing literature, or any other rhetoric. I will post more thoroughly on this at a future date.

Next to Burke is the first film purchase, Jess Franco's Dracula Prisoner of Frankenstein. I have a few other outlets to get films, but am pretty sure I will not be able to get this one from any other source, so I placed it in this first order. It's also a film I've been trying to hunt down for about 20 years. Jess Franco is (sort of) the Ed Wood of Europe, I like to call him. He makes horrible films, but has a certain amount of enthusiasm for the horror genre, which I can very much appreciate.

Below that are two books that I chose to order first because I think I can use them for far more than just this project. The Golden Turkey Awards is a list of the worst movies ever made. It didn't have as many Frankenstein films in it as I had hoped, but it is a fun read.

Next to that is a far more serious study, that of homosexuality in film, The Celluloid Closet. It is essential for one chapter, but it is a very important chapter, the one on James Whale's Frankenstein and Bride of Frankenstein, which I will examine together. Whale was one of the first openly gay figures in Hollywood. I would also like to use the book to write another article or two on Whale and the horror genre in general that will be separate from this book project. The book doesn't look exclusively at horror, but LGBTQ images in Hollywood.

I've also finalized the title of my book, Franksploitation and the Rhetoric of Filmed Frankenstein. I will be posting much more about it in the future, so please keep checking back, and don't be afraid to subscribe.
Posted by Bill "Classic" Camp at 9:03 PM