It's been an up and down week for me. It started off great as I sold another short story this week (Yippie!). Two short stories in two weeks is nothing even close to anything I ever experienced before. Both were stories I wrote in a creative writing class I took as an undergrad. I will again provide more details about where and when my work can be found as the time grows closer (should be some time toward the end of March).

I also received a rejection e-mail (my knee-jerk reaction is to still call them "letters") for one of the stories I sold, and another one earlier this week for several poems I submitted. Then I woke up this morning to an e-mail informing me one of the publications where my work will be published will be presented (although my specific work will not be presented) at a conference in April.

Meanwhile, I had been playing telephone tag with a head of the English Ph.D. program where I had applied. This was not specifically to inform her of these two recent publications, but I figured as long as I have her one the line, I might try to mention this fact. I finally caught this lady on the phone today. We had a decent talk and I asked a few of my other questions I had about touring the campus and discussing the program with others there. I mentioned the two publishing successes I recently received (which were not included in my curriculum vitae because they occurred after it was submitted), and she was quite unimpressed. She kept saying she didn't want to read them, even though I made no indication I wanted her to read them, just to acknowledge I two new publications not present on CV. The only thing I thought she might be interested in seeing were the acceptance e-mails to prove I was telling the truth.

I've had a similar experience when I joined the Horror Writers Association in reverse. In this case, I was trying to show that I have experience with research and teaching in writing and was wondering if I could qualify under the scholarly membership.

Anyway, this was not intended as a rant or a vent or even a criticism of either field, just trying get someone out there to think about things. Anyway, in the meantime, here's a jack-o-lantern I made this past Halloween. 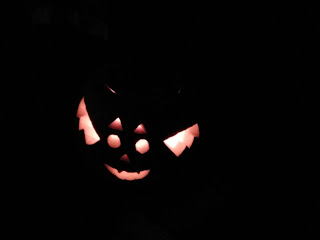