I FINALLY Sold a Short Story!

Yay! It has been a long time since I sold anything, seven years to be exact. But now the drought has ended. I should also point out that I have not been submitting very many short stories or poems during much of that seven years (although I have submitted a few items). Much of that time has been spent submitting my current novel, The Sorcerer, rewriting it, sending it out some more, and working on two other rough drafts of novels.

Then I finally got a hair up my ass. I looked at my spreadsheet of all the things I've ever submitted for publication, my novel, short stories, and poems. I decided to try a tactic that I'd used before to get my work published, and sent everything I have out to one publication or another. Everything! When I stopped and looked at everything I had, I remembered a few pieced I had retired a few years ago. I realized that one piece had only been sent out once since I rewrote it. So I thought, what the hell, let's go ahead and send that one out, too.

I never really liked that rewrite. It was originally a story I wrote 20 years ago for my Creative Writing class for my undergraduate degree. The assignment was to include a song I really liked. After I graduated, I tried getting some of my works published, but I already knew what the problem would be with this one piece. It included a song that was copywritten material. No one would ever publish it due to the legalities. So I eventually got around to rewriting it and taking out the copywritten song and replaced it with a generic "Irish drinking song," as I describe it in the short story.

But I thought it would never work. The piece was so much better with the copywritten song. So I only sent it out once in that form, and it was quickly rejected. I left it alone and forgot about it. Life got in the way and when I had time to write I concentrated on writing other things. Then as noted above, I decided to send out everything I have, and sometimes to multiple publications, and finally, this past Wednesday, I received an e-mail accepting my short story for publication. When I receive more information I will reveal the publication and issue the piece will appear.

I've often heard that the artist is often unaware of what their best work is, but I'd never experienced it myself. I guess this is my first time with that story to add to my repertoire. For now, here's a picture of a Shamrock Shake, which should be returning soon, because my story included an Irish drinking song, and for a little more luck. 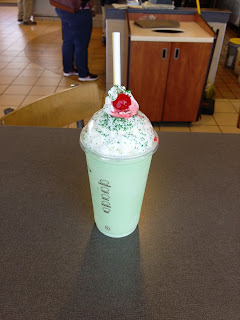