More about the writer's group

Last week, I posted about my writer's group and how happy I was with it. I'm still happy with the group themselves, but now they are changing around some of the meeting times. Friday afternoons was a great time that worked well for me, but this week they changed to Thursday, and I had other early evening plans, so I could not make it, and next week they are planning to meet on Wednesday. I'm not sure if I will make it or not.

However, I did get a Beta reader out of the group. I've sent him several chapters to review, and he's sent them back. I asked if he was willing to continue looking at chapters, and his reply was that he was in this for the long haul. He's also stated he wanted to send me a few things for critique, so of course I said sure. He writes comedy and I write horror (which are more closely related than most people think, but that's an item for another post one day).

Anyway, my current project is Blood of the Werewolf, which I'll also post more about in the future. I first started this story back in college, and put it through one rewrite already, but it desperately needs another. I'm currently on chapter 6, and have added several scenes. My Beta reader recently reviewed chapters 3 and 4. I'm saving further revisions until I finish this one though. Perhaps this Blog should also be about me receiving information about writing and the writing process as well as providing it. Does anyone have any feedback about Beta Readers and whether or not you feel I'm doing this correctly?

Next week, I'll be attending Fanta-Sci at the Chesapeake Public Library and Fantasmo that evening, so I'll post about that. As a preview, below is a photo of me at Monster Fest one year. 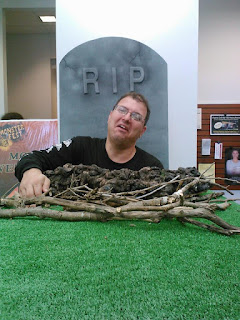