How to write a Eulogy 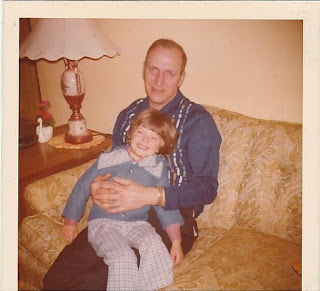 I wrote my first eulogy recently. My father passed away, and I felt obligated as the family writer to write one for him. That's him pictured with me in the late 1970s at my grandparents' house. I'm not sure I'm really over it yet, as I've found it very hard to do any writing since he passed almost two weeks ago. His eulogy was the last thing I wrote until this blog post.

I feel I did really well on the eulogy and received several positive comments, so I thought I would post today about how I went about writing it.

First off, I approached the eulogy as a college essay, with an introduction, a body, and a conclusion. I even included a thesis statement. Basically, mine was that my father had a rough upbringing but fought to become a very good person in the end. There was a lot more to it than that, but for the purposes of a how to blog post, I think that suffices.

Then I went through the various stages of his life. His upbringing, how his father built their house (and my father and his brother continued working on it until it finally sold in the early 2000s). Something about his time in the army, and then of course how he met my mother. A little something about when my sister was born and then when I was born, and finally the end concluded that portion.

But to ensure things do not become too sappy or depressing, it is good to put in a few humorous stories. I had one that everyone commented on afterward. It was about how my father used to teach me things, such as when he would play board games with me when I was a child, he would never let me win. When I asked if he could let me win, he would tell me that's not how life works, you have to work for everything. Later, when I married and we had a child, my daughter would play board games with my father (her grandfather), and he would ALWAYS let her win.

I finished up with a positive note, which I think is also important in writing a eulogy. I talked about how my dad didn't like to look back but forward to the future. To keep growing, and advancing, and moving forward. So here's to you dad, I finally put down a few words since your eulogy. Here's hoping I get down a lot more.
Posted by Bill "Classic" Camp at 10:17 PM