I am a Monster Kid, and What That Means

I grew up a monster kid. I'm not exactly sure what that even means, but it's a label being used a lot these days. There is even a quick guide to help determine if you, too are a monster kid on this blog.

To the best of my knowledge it simply means I loved monsters when I was a little kid growing up. According to many articles, I'm in good company. There is an entire magazine dedicated to monster kids. According to one source, the term was not coined until 1995 by someone on the internet. Forrest J. Ackerman can certainly count himself as one of the original monster kids. In modern times, Guillermo del Toro can certainly count himself as a monster kid. Certainly, Author Ray Bradbury, and Moviemaker Ray Harryhausen are counted as other famous monster kids.

To my understanding, a monster kid is simply anyone who grew up watching and loving monster movies. One of my earliest memories of my love for monster movies was when the 1976 version of King Kong was first released on television in a two night event, and my grandfather encouraged me to sit with him and watch it when he was babysitting me. I was immediately hooked on King Kong.

It's sometimes funny how one small event in your childhood can have such a large role in developing who you become later in life. It makes one wonder if, for instance, I would have grown an interest in monster movies anyway, or if this event was the cause of it all.

Anyway, after that, I was in the library with my mother one day when I found the Ian Thorne Monsters series of books on Kong, Godzilla, Frankenstein, Dracula, and all the rest of the great monsters. I read them all several times. Every time I went to the library, either public or at school, I would check out one of these books, or another one similar on monster movies, how to make them, the actors who played in them, or anything else on the topic. Then one day in the third grade, I found the novelization of King Kong by Delos Lovelace, and it became the first real book I read. 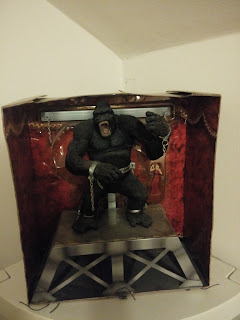 Like most monster kids, I then found a hosted horror movie show in my area. It was The Late Great Horror Show on WJET-TV channel 24 in Erie, Pa. Here I finally found some of the most famous horror monsters such as The Mummy's Curse, Frankenstein, and what became my favorite, Godzilla!

A few years later, we got cable. This opened up a whole new world of television to my developing young mind. Included in that world was certainly the world of monsters, particularly those on WWOR channel 9 in New York on Thanksgiving Day and the Friday afterward. But I could still never catch the 1933 version of King Kong, nor could I catch another favorite of mine, King Kong vs. Godzilla. Then one night, King Kong vs. Godzilla was scheduled to come on the other cable channel 9, WGN in Chicago. I snuck up, and watched it in the middle of the night. Finally, a brand new cable channel came out called American Movie Classics, and they aired the original Kong and Son of Kong.

At the beginning of each week, I used to (and still do quite often, actually) check the television schedule to see what monster movies were coming on that week. Then my whole week was scheduled around the movies that would air. This was just before my family got a VCR. When we did, Godzilla, King of the Monsters on another hosted horror movie show, Super Scary Saturday on WTBS, hosted by Grandpa Munster, was one of the first thing I recorded, and King Kong on AMC (back when American Movie Classics actually showed classic American movies) was soon after. 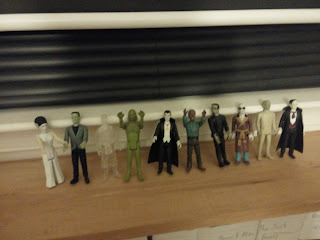 But by this time I was looking for something a little bit more. I wanted to discover the original stories that these movies came from. One day I borrowed The Time Machine by H.G. Wells and read it in one day. This made me thirsty for the other original horror and sci-fi monster stories. I got a copy of Dracula by Bram Stoker, and this became my all time favorite novel, and shortly after Mary Shelley's Frankenstein. At this point I was hooked for life. There's no turning back now.

As an adult, I now have become a collector of action figures, which are pictured throughout this article. I'm sure there are many other Monster Kids out there. I hope this lends a little light on what that means.